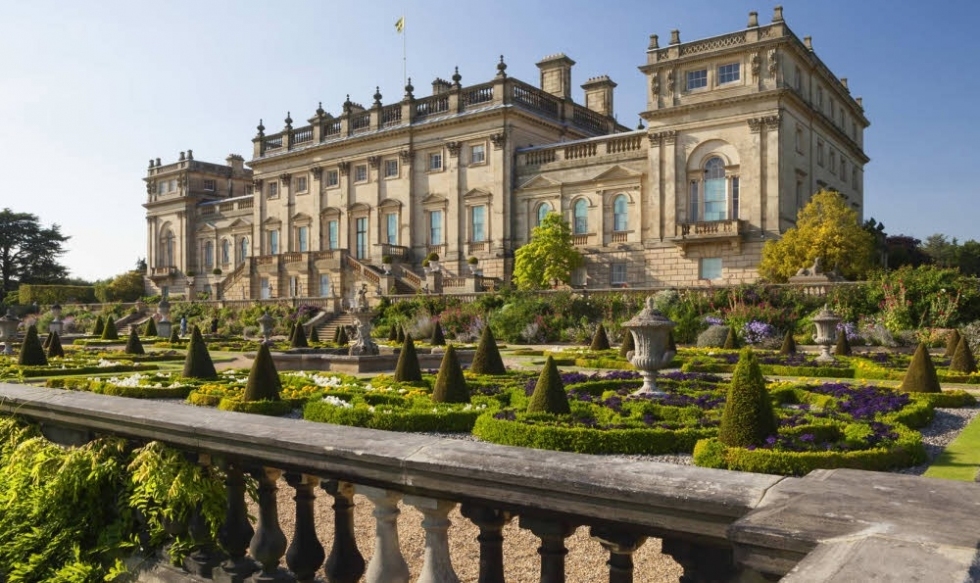 John Carr (1723 - 1807) was a prolific English architect. Best known for Buxton Crescent and Harewood House, much of his work was in the Palladian style. In his day he was considered to be the leading architect in the north of England.

John Carr was a renowned English Georgian architect and the only provincial member of the London Architects’ Club. He was best known for The Crescent in Buxton, Derbyshire and also Harewood House. He became Lord Mayor of York in 1770 and 1785, living first at Skeldergate House in the city and then, after retiring, to live at Askham Hall at Askham Richard, near York where he died on the 22nd February 1807, leaving a fortune of £150,000. 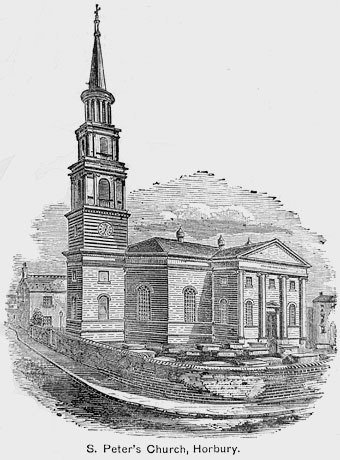 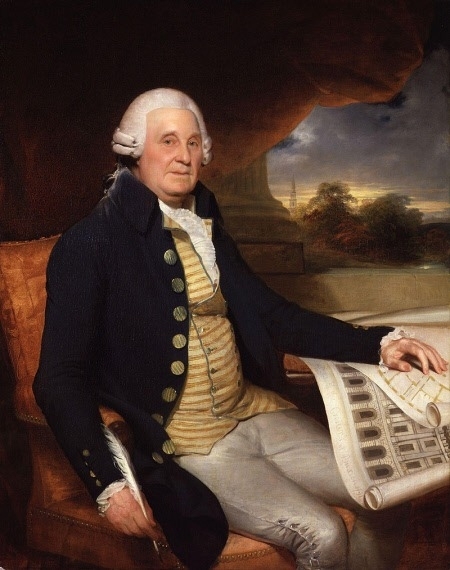 An engraving of St Peter's Church.

Carr was born in Horbury, the first child of nine to Rose Lascelles and Robert Carr who lived in a cottage at the end of Northfield Lane. His father was a mason-architect and owned two small quarries. John entered the family business, and learnt draughtsmanship and practical construction skills while working at Bretton Hall and Chevet Park. These skills came into their own when he began his architectural career in around 1748, following his father into the post of joint county surveyor for the then West Riding of Yorkshire. At 23 years of age, Carr married Sarah Hinchcliffe, some ten years his senior, who worked as a maid at Bretton Hall when he was working there. They had no children, and he adopted his brother's son William as his heir.

Carr set up as an architect on his own at the time of his marriage, his first independent building being Huthwaite Hall near Horbury, in 1748, and he built Kirby Hall, designed by Lord Burlington and Roger Morris for Stephen Thompson.

Taking up the post of county surveyor for Yorkshire's North Riding a few years later, Carr acquired several of the county's magistrates as patrons while working in York, where he first appeared in about 1752, but probably settled there some years earlier. In York was an ancient spring named called Pikeing Well, and on the 9th July 1752, the Corporation of York agreed to pay John Carr a sum of £88 to erect an ornamental building that would enclose the well. £25 of this fee was retained for Carr's admission as a Freeman of York, a highly prized position even today. Carr was not admitted as a Freeman of York until 1757 after he completed the Pikeing Well House. His work in York put him into contact with the county's magistrates. Several became his patrons. He was popular with the Whig establishment, most notably the hugely wealthy Marquis of Rockingham. This established his name and he became known as the leading architect and designer in the North of England. Much of his work was in the Palladian style following which he was influenced by Robert Adam and he then pioneered the Gothic Revival. 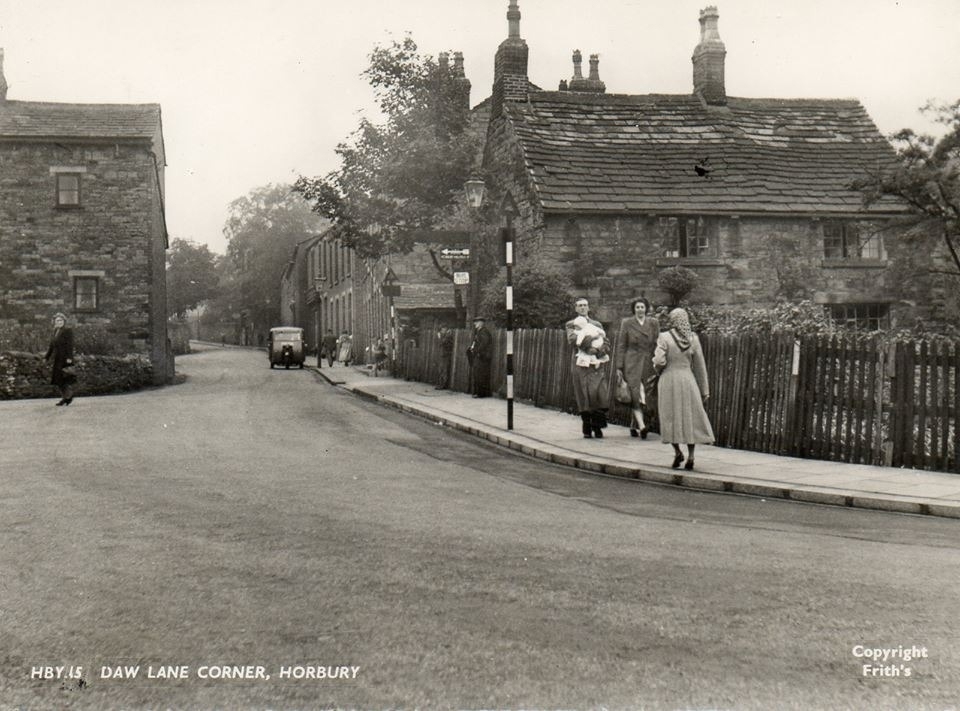 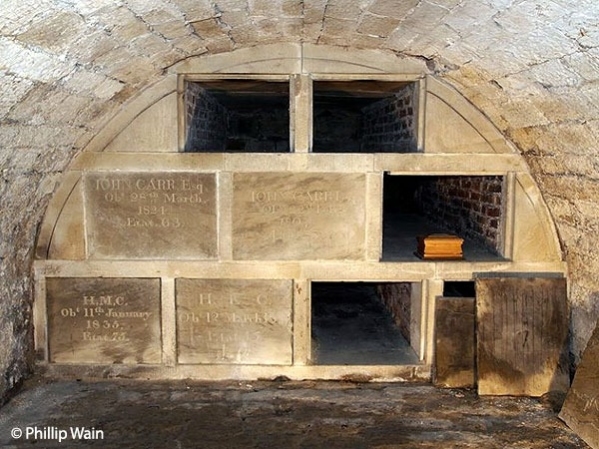 Postcard c1960 showing the cottage in which John Carr lived as a boy. Coutesy of Nev Ashby.

As bridgemaster for both the West and North Riding he was required to survey a huge number of bridges. He designed, extended and altered many country houses as well as a number of public buildings, many of which are in Yorkshire. His work in York included the Bishop's Palace, Micklegate House (1753), The Pikeing Well-House, New Walk (1752–56), Knavesmire Racecourse Grandstand (1755–56), now demolished, Bootham Park Hospital (1774-77) and the Assize Courts (1773-77). He twice surveyed and repaired York Minster.

Elsewhere in Yorkshire his works included Ripley Castle, Castle Howard, Constable Burton Hall, a House of Correction, Wakefield (1766), Northallerton Prison, Doncaster Racecourse Grandstand, plus a new bridge over the River Aire at Ferrybridge (1803). Carr also left his mark in Cumbria with Holker Hall, Derbyshire with The Crescent, Buxton (1781) plus work on Chatsworth House, and Nottinghamshire with Newark Town Hall as well as many other sites in Cheshire, Lancashire, Lincolnshire and Berkshire. His largest work, the Hospital de Santo Antonio in Oporto, Portugal, was only partly finished. Due to the soundness of his constructions most of his buildings survive today.

The citizens of York were rightly proud of their adopted son John Carr and he was a familiar figure in the city as he walked through the streets from his house in Skeldergate, which was was demolished in 1945. Civic affairs also interested him and on the 3rd February 1770, Carr became the Lord Mayor of York. The man from Horbury was said to have discharged his duties as Lord Mayor with "becoming dignity and hospitality." When the then Lord Mayor died in office in 1785, John Carr was again appointed to replace him and for the rest of his life he was an alderman of the city, also serving as a J.P.

Perhaps John Carr's best known work is Harewood House, the foundation stone of which was laid in March 1759.(1)

Despite his fame and considerable fortune, John Carr never forgot Horbury, the village of his birth. About 1790, he obtained permission to demolish the old 12th century Norman church in Horbury. He replaced it, at his own expense, with the present church of St Peter and St Leonard, as he expressed it "as a memorial to his skill and bounty." The original cost was £8,000 with a further £2,000 for the bells and organ, which he added later. This would be the equivalent of between about £5 Million and £10 Million today depending on skilled labour costs.

Carr's gift to his native village almost ended in tragedy for he was evidently unacquainted with certain principles of architectural design and omitted from the lower part of the steeple certain supporting arches. Because of this omission, 100 years later, the steeple was was in danger of collapse, and was only saved by the insertion of steel girders and some more modern design techniques. The heavy stone ball, which completed the spire came crashing through the roof of the church in a storm and was later replaced with an iron cross.

John Carr retired to Askham Richard Hall, a magnificent mansion on the western outskirts of York, which he had helped to build himself as a young stone mason years before. John Carr remained active right into his 80s and when he was 80 years of age, he set out for a trip to Scotland with two young ladies of his acquaintance, driving his own carriage with two horses and with two servants following behind on horseback. Carr died on the 22nd February 1807, aged 84 years, and leaving behind many monuments to his architectural skill and a massive fortune of £150,000 or about £93,000,000 (£93 Million) measured by today's values.

Although it was always thought that John Carr was buried at Askham Richard, in July 1950, when repairs were taking place at St. Peter's church, Horbury, a vault was discovered under the floor of the vestry, in which lay the coffin of John Carr. Several children's coffins and those of two of Carr's relatives were also found in the vault. Several of the stone ledges were empty and there is no sign of John Carr's wife, of which very little is known.

Thank you for visiting our website - we hope you find it useful and interesting. We want Horbury's history to be shared as widely as possible so feel free to use our research elsewhere, but, if you do so, please acknowledge this website and provide a link back to it. Many thanks.